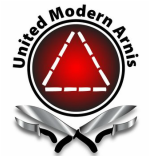 In Modern Arnis, each weapons movement has application not just with a cane, but also with a machete, knife, and even empty-hand techniques. Training emphasizes both right handed and left handed application of most techniques. Only movements or techniques that can be taught and learned easily and in a relatively short time are taught.

One of the major concepts strived for in Modern Arnis  is the "flow”. To flow seamlessly from one range to the next and one movement or technique to the next is the essence of the "flow”.

We train from all ranges: long/weapons-only range, middle range (punches, kicks, parries), and close range (locks, throws, traps, knees, elbows), and ground fighting/grappling. We train to move into and out of the various ranges. Weapons are introduced to students from the onset.

Our particular instruction of Modern Arnis continues in the spirit of the Professor’s intent for the art and additionally blends in elements of Pencak Silat Mande Muda, Wing Chun, Aikido, Renegade Jeet Kune Do and Bando. That is one of the reasons that we call it United Modern Arnis.

Modern Arnis is a well-rounded, complete, and practical martial art. And for those with existing or prior experience in another art, Modern Arnis can also serve to enhance your training and provide insights applicable to other arts.
Photos by Zummo Photography
The Columbus Aikikai, inc., dba Hilliard Martial Arts Center, does not discriminate on the basis of race, color, national or ethnic origin
Copyright © 2015